Vaccination willingness in Europe: Who are the unvaccinated? 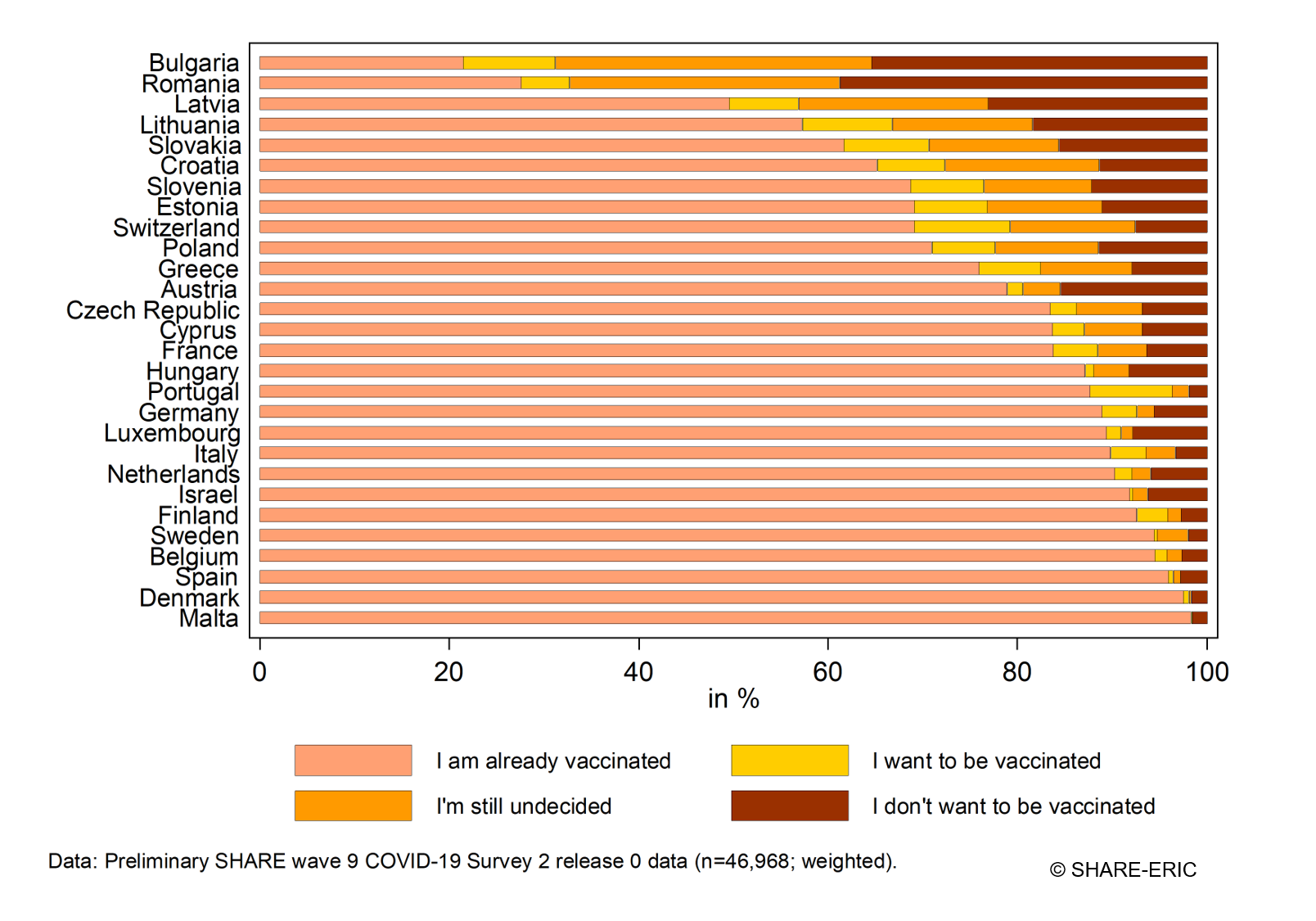 MEA researchers analyzed the willingness to get vaccinated against the background of demographic, socio-economic and health factors of people in Europe and Israel.

A new MEA study reveals which factors influence the willingness for vaccination across Europe. To find out more about people who do not want to be vaccinated or are still undecided, the researchers Bergmann, Hannemann, Bethmann and Schumacher used data from the second SHARE Corona Survey. SHARE, the Survey on Health, Ageing and Retirement in Europe, very recently collected data on vaccination uptake and a number of influential factors for about 47,000 individuals in the high-risk 50+ age group across 27 European countries and Israel.

Country differences in attitudes towards vaccination

Around 18 % of the respondents in all 28 countries reported by the survey period in summer 2021 that they have not been vaccinated. However, there was great variation across countries. As shown below, Malta, Denmark and Spain were in the lead with over 95% of respondents vaccinated and Romania and Bulgaria trailing behind with about 28% and 21 % respectively. Of the unvaccinated SHARE respondents, 33 % reported that they were still undecided, while 45% stated that they didn’t want to get vaccinated. In Romania and Bulgaria, the countries with the lowest overall vaccination rates, about 40 % were undecided about the vaccination, and 54 % (Romania) and 45 % (Bulgaria), stated that they did not want to get vaccinated at all. Even if a considerable number of the undecided could be swayed to get the vaccination shot, the high number of vaccination refusers will make it very hard to reach herd immunity via vaccination in these two countries. The same applies to other countries, in which the share of vaccination refusers based on all unvaccinated 50+ respondents in a country is rather high, such as in Latvia (46 %) or Lithuania (43 %).

Who are the people who are still unvaccinated?

In a next step, the researchers considered the demographic, socio-economic and health situation of those respondents who are undecided or deny the vaccine.

Living in financially deprived households is the strongest predictor

The researchers revealed that the economic situation is the strongest predictor of refusing the vaccine or at least being undecided: People within the lower quartiles of the income distribution more frequently did not want to be vaccinated or were undecided to do so, while the opposite was true for higher income quartiles. This finding was supported by the respondents’ subjective reports of how hard it is for them to “make ends meet”: Nearly 30 % of people who stated that they could make ends meet only “with great difficulties” were undecided or refused vaccination, while it was only 7.8 % for those reporting to be able to make ends meet “easily”. This clear pattern remained also when looking at country differences. When considering employment status there was also a considerable difference between (self-)employed, retired and respondents with other (non-)working status. This difference was greatest between unemployed respondents, of whom 28.5% were undecided or opposed to getting vaccinated and retired, of whom 11.5 % had opted out of or were still undecided about the vaccine. One explanation may be the age effect, as retirees are older on average.

The role of education: People with post-secondary education are less sceptic

Gender and Age: Women and respondents younger than 65 are more likely to deny

Age also plays a role: Respondents between 50 and 65 years are more likely to refuse the vaccine than older respondents and this applies to nearly all countries. Additionally gender is a factor for attitudes towards immunization: Women were more likely to be hesitant than men. On average, 14.5 % of the women were undecided or refusing the vaccination, whereas only 12.8 % among men. But not in all countries: In Hungary, Portugal and Switzerland for example, it seems that there were more males who were still undecided or didn’t want to get vaccinated.

The healthier people are, the more likely they are to reject or be indecisive

Regarding health, respondents without a diagnosed physical illness had a higher probability of being undecided or unwilling to be vaccinated (16.9 %) compared to those with at least one diagnosed illness (12.4 %). This difference was strongest in Hungary, Lithuania, Luxembourg and Switzerland.

Further, the researchers found a difference between those people who stated that they didn’t know anyone physically affected by COVID-19 and those who did. Of those who do not know anyone affected, 14.7 % reported being undecided or unwilling to get vaccinated. The number slightly decreased to 13.7 % for people that know somebody mildly affected (any symptoms or positive test) and further declined to 10.3 % for those that know somebody severely affected (hospitalization or even death in close vicinity) by COVID-19.

To conclude: There is a West-East gradient: a high rate of vaccination uncertainty and refusals across most of the Eastern European and Baltic states compared to the other European regions in the West, South and North of Europe. Additionally, the researchers found, that people with economic difficulties and lower incomes, as well as those with lower educational status, were less likely to opt for vaccination. Moreover, physical health and being directly affected by COVID-19 in the immediate environment also played an important role.

SHARE, the Survey of Health, Ageing and Retirement in Europe, is a research infrastructure for studying the effects of health, social, economic and environmental policies over the life-course of European citizens and beyond. From 2004 until today, 480,000 in-depth interviews with 140,000 people aged 50 or older from 28 European countries and Israel have been conducted. Thus, SHARE is the largest pan-European social science panel study providing internationally comparable longitudinal micro data which allows insights in the fields of public health and socio-economic living conditions of European individuals, both for scientists and policy makers. SHARE has global impact since it not only covers all EU member countries in a strictly harmonized way but additionally is embedded in a network of sister studies all over the world, from the Americas to Eastern Asia.

SHARE is the ideal database to study the non-intended socio-economic and health consequences of the epidemiological containment decisions and the long-term effects of the COVID-19 pandemic due to its life-course and multidisciplinary approach combining health with socio-economic data. The European Commission supports a new COVID-19 research project (SHARE-COVID19) with funds provided by Horizon 2020 and the Coronavirus Global Response.

The SHARE Corona Survey is a special study which has been designed as reaction to the COVID-19 crisis. In the beginning of June 2020, SHARE started the fieldwork with a sub-sample of SHARE’s panel respondents in 27 European countries and Israel. SHARE used Computer Assisted Telephone Interviews (CATI) to collect data targeted to the COVID-19 living situation of people who are 50 years and older. The SHARE Corona survey covers the most important life domains and asks specific questions about infections and changes in life during the lockdown: Health and health behavior, Mental health, Infections and healthcare, Changes in work and economic situation, Social networks. The second round of the SHARE Corona Survey, fielded from June to beginning of August 2021, re-interviewed respondents of the first SHARE Corona Survey enabling to study (intra-individual) changes between the start of the pandemic and the situation one year later in a cross-national perspective. The data collected with this survey allows examining how the risk group of the older individuals is coping with the health-related and socioeconomic impact of COVID-19.