History
You are here: 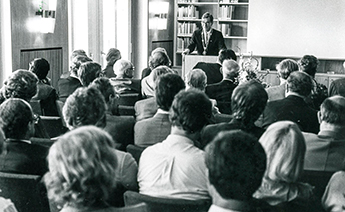 Prof. Reimar Lüst, President of the Max Planck Society from 1972 to 1984, at the inauguration of the Institute.

The Institute evolved from a project group dedicated to international and comparative social law launched in 1976 under the leadership of Prof. Dr. Dr. h.c. mult. Hans F. Zacher. Ahead of schedule, that is, prior to the end of the originally planned term, the project group’s conversion into the Max Planck Institute for Foreign and International Social Law was resolved and subsequently carried through in 1980.

The Institute started out under the direction of its founder, Prof. Dr. Dr. h.c. mult. Hans F. Zacher, who in 1990 assumed the office of president of the Max Planck Society while continuing his directorship on a temporary basis. His position of director was later taken over by Prof. Dr. Bernd Baron von Maydell (1 February 1992 – 31 July 2002) and, after the latter’s retirement to emeritus status, by Prof. Dr. Ulrich Becker (since 1 September 2002). According to its Statute, the Institute was devoted solely to research in the field of foreign and international social law until 2011.

In 2010, Prof. Axel Börsch-Supan, Ph.D. became a scientific member of the Max Planck Society and took office as co-director in 2011. Due to this appointment, the Institute has substantially expanded its area of work: one department, headed by Ulrich Becker, has continued its research on foreign and international social law, while the second department, the "Munich Center for the Economics of Aging" has been dedicating its research to social policy under the leadership of Prof. Axel Börsch-Supan. In accordance with the new research structure, a new Statute was adopted by the Senate of the Max Planck Society, and the institute formerly known as Max Planck Institute for Foreign and International Social Law was renamed Max Planck Institute for Social Law and Social Policy with effect from 1 July 2011.

From 2010 to 2020, the research group "Inclusion and Disability" headed by Max Planck Fellow Prof. Dr. Elisabeth Wacker also enriched the Institute's work. It investigated structures, measures and impacts of prevention, rehabilitation and health development from a national and international perspective.