Ageing of the Workforce and Social Protection in Europe

This research project dealt with a research topic of high complexity: It is aimed at analysing the challenges to social protection schemes in Europe provoked by two intertwining developments: on the one hand, the profound changes in career patterns marked by discontinuities, flexibilisation and new production modalities in the context of digitisation, compounded by an on-going erosion of labour law standards; and the ever increasing life expectancy on the other, that is impacting on the duration of working lives. Due to such flexible employment patterns and the emergence of an ageing workforce, European welfare states are confronted with new challenges they must overcome in order to ensure that everybody may participate in gainful activities during his or her life course while also guaranteeing social rights through adequate social protection.

Thus, the special focus of the social law research project relates to the adaptation and modernisation of social protection schemes that are needed in order to maintain the work ability and employability of an ageing workforce throughout the life course, while also cushioning the requirements linked to an extended working life in a socially acceptable way.

The project takes up fundamental issues concerning the modernisation of social security and social protection in a work environment subject to profound epochal changes in accelerated rhythms, encompassing both social law and labour law. The social security systems had originally – in all Member States, albeit to a different extent – been designed for a society engaged in industrial work and full employment. Thus, the risks covered today often do not sufficiently match with changing employment patterns or the requirements concerning extended working lives: Are these schemes able to contribute to the maintenance of the work ability and labour market participation of individuals that are required to postpone their retirement decisions? To what extent do they allow for flexible transitions between phases of employment and other phases in the life course (such as longer periods of ill health or periods dedicated to family responsibilities)?

Besides, the research project also seeks to shed light on the interplay of the various instruments of social protection involved, including public schemes and the measures adopted at company level (including age management initiatives). Do the existing instruments contribute to the realisation of consistent interactions between the systems involved, and do they concur in reaching the overall objective of promoting extended working lives? Or do they, on the contrary, pursue conflicting aims, thus provoking inconsistent or paradoxical effects and creating poverty traps? The main focus of the analyses is on Germany and France. Yet, the cases of Norway and the Netherlands, and to a minor extent Italy, also provide insights into reform tendencies in social protection, in particular with a view to long-term illness, reduced work ability and unemployment.

The research project addresses the newly emerging “career risks” at first by looking at the overall European context and the legal and socio-political framework given by both the European Union and the Council of Europe. This ranges from impulses under Union law for social cohesion, via European perspectives for a common old-age pension policy, on the perspectives of a gender and life-course sensitive European labour market and social policy agenda, through to issues related to the qualification of social rights in EU law and in the case law of the European Court of Human Rights and, finally, to European anti-discrimination law on grounds of (old) age, including the consequences of the European ban on discrimination in private insurance law in France.

The main part of the project is dedicated to the answers that various European States have adopted at national level to cope with the combined challenges of longevity and changing realities in employment careers. The national case studies allow a comparison of the measures and reform experiences in three career-related risk categories throughout the employment biography: health-related risks and corresponding interventions during an employment relationship; interventions before or after dismissal or collective redundancies, with a special focus on the protection of senior unemployed persons and their right to work; and finally the management of transition towards retirement and protection during the post-retirement phase.

The first topical issue deals with measures and instruments aimed at keeping an ageing workforce in good health, in particular by preventive and rehabilitative measures. Attention is also paid to measures seeking to prevent early labour market exits due to health problems, including schemes to support job stability in case of long-term illness and reduced work ability and capacity. The country studies are complemented by an analysis of the factor ‘health’, among other factors, that may influence decisions to withdraw from the labour market (or not) from the perspective of occupational medicine. It shows that impaired health alone is not the main factor for early labour market exits, and that a positive work environment can compensate for impaired health conditions. The second topical issue relates to a vast spectrum of measures to retain and promote employment among senior workers, although in general, dismissal of senior workers continues to be associated with long-term unemployment throughout Europe. The analyses present incentives for the prevention of unemployment at company level (age management initiatives) as well as labour market policies targeted at the re-integration of senior workers or workers with reduced work capacities. Again, the national legal analyses are complemented by an empirical study comparing positive and less promising labour market instruments introduced for an ageing work-force. The last topical issue takes up the protection of social rights in the transition to and during the post-retirement phase. In this context, it is worth mentioning the French example as France introduced labour law legislation (2003/2010) that prohibits employers to end open-end employment contracts before the age of 70 without the consent of the employee. Even before the age of 70, the termination of such contracts requires the fulfillment of all eligibility requirements for the future retiree to be able to access an old-age pension without deductions under the French basic scheme. At the same time, by means of collective agreements, the legislator continues to support age management programmes for senior workers to exit the labour force. This is seen as problematic, not only because access to such provisions has proved to be distributed rather unequally, but above all because such provisions tend to devaluate the expertise and potential of senior workers.

The results were published in 2018 in the trilingual volume "Erwerbsverlauf und sozialer Schutz in Europa" under the editorship of Eva Maria Hohnerlein, Sylvie Hennion and Otto Kaufmann. 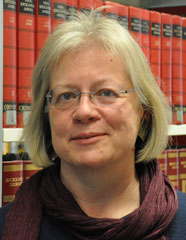